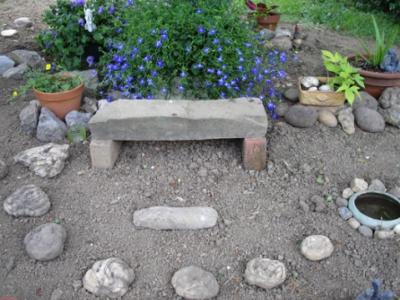 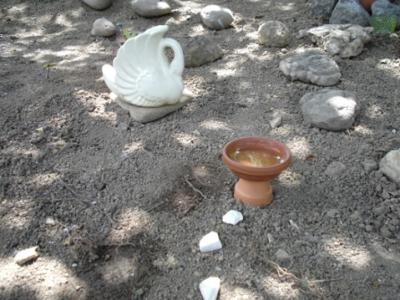 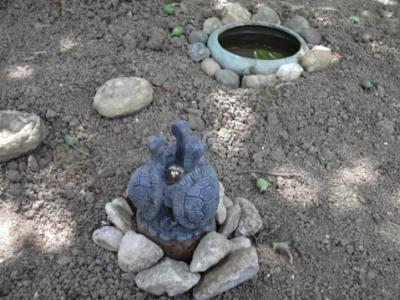 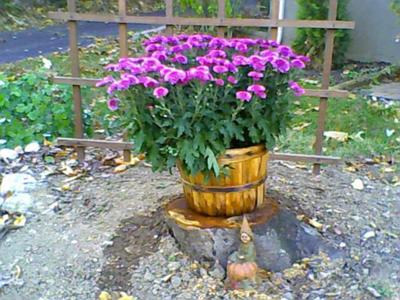 I have what I call a fairy garden in the backyard. It was once under an apple tree and I used stones that were laying around the property to help create it. In such a setting, even small stones can be used to simulate a pathway to a pretend fairy pond, birdbath, or statue. And the benefit of using natural stones is that they're permanent, unlike terra cotta. However, I don't want to imply that I dislike terra cotta. I actually used it to make a fairy birdbath which the photo shows, but the weather got to it. Terra cotta is an enjoyable garden staple and I use it to pot up plants.

Well, anyway, this fairy garden has gone through changes and a major one is that the apple tree has been chopped down. So now the remaining stump is used as a pedestal right now for my potted mum. Also, some ornaments like the fairy pond and statue are gone due to breakage or because they'd been hanging from the apple tree's branches. However, the stones remain, although they're arranged differently. The fairy bench remains, too, and a trellis has been added as a backdrop.

Mulch is something else I've used in naturally enhancing this small garden. When I lived at the apartment, I had pine trees behind my balcony and they, of course, dropped lots of pine needles. Personally, I think pine needles gathered from under a pine tree can make an attractive mulch if one doesn't want to purchase mulch from a garden center, which is what was done for the fairy garden.

Another simple thing I did was that I gathered some dried stalks and arranged them in a pile somewhere in the main garden. To me, this display seems to add visual interest to a late season garden where the fallen leaves of the corkscrew willow are scattered about. :)

Join in and write your own page! It's easy to do. How? Simply click here to return to landscape decor.

Save Money & SHOP for Your Home and Garden